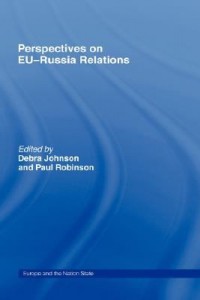 The subject has become a classic. And obviously joined our concerns. Since EODE designed specifically Russia and the European Union as the two halves of the United Europe – That symbolizes our logo – the continent of Europe-Vladivostok-Reyjavik. In line with the pioneering work of our founder Luc MICHEL and his "Euro-Soviet school of Geopolitics” in the years 1983-1991.

Since then, much water has flowed from one end to the other of the continent and this iconoclastic Thesis in 1983 Became one of the main ideas of the European Geopolitics, That of the "must partnership."

The book Perspectives on EU-RUSSIA RELATIONS fits into this framework.

This book explains how the internal dynamics of transition have influenced the relationship between Russia and the EU. Taking an holistic approach, the authors present a balanced analysis exploring EU, Russian and US perspectives on the Russian-EU relationship and examine a range of political, economic, business and security issues including the Northern dimension of Russian-EU relations, the Chechen situation, Russian domestic economic policy, trade, the business environment, energy and EU technical assistance.

They also address such questions as:

* Will bilateral relations be achieved with a Western or Russian model?

* Who is the main driver of Russian-EU relations?

* Is Russia converging with the EU in terms of business, culture, legal environment and systems?

* Does the Russian-EU link provide a new model for EU external relations?

Precisely the questions of this book – “Will bilateral relations be achieved with a Western or Russian model? / Who is the main driver of Russian-EU relations? – join our major concerns:

Could Russia to lead a new process of European Unification.

Russia hegemon of a Greater-Europe, as was the Great Macedonia Greece – That of Isocrates, Philip and Alexander -is an assumption that obviously requires an effort of imagination far removed from the conformism academic. But when the EU is facing now a possible failure, unable to move from single market to the rank of state – European power – Europe, specifically, needs imagination and a great design …

Part I: The Introduction

Debra Johnson is Senior Lecturer in the Business School at the University of Hull where she teaches and writes on European and international business. Prior to becoming an academic, she worked as an economist in the energy and transport industries in the public and private sector.

Paul Robinson is Lecturer in Security Studies at the University of Hull. He has written a number of works on Russian history and on contemporary security issues. He has also worked as an executive for the British media research company, Russian Research, in Moscow.

Photo: Cover of the magazine CONSCIENCE EUROPEENNE (European awareness), edited by Luc MICHEL, in 1983. "Russia is also Europe," a subject so iconoclastic …

This entry was posted in * English, * EODE-Books/ Géopolitique. Bookmark the permalink.