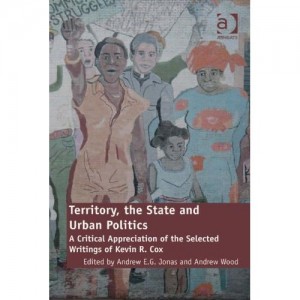 # TERRITORY, THE STATE AND URBAN POLITICS

A Critical Appreciation of the Selected Writings of Kevin R. Cox

Following its rise to prominence in the 1990s work on territory, the state and urban politics continues to be a vibrant and dynamic area of academic concern. Focusing heavily on the work of one key influential figure in the development of the field – Kevin R. Cox – this volume draws together a collection of prominent and well established scholars to reflect on the development and state of the field and to establish a research agenda for future work.

The various chapters address methodological, conceptual and philosophical issues, including questions of abstraction and empirical specification.

Highlighting and reflecting on the work of Kevin R. Cox, the book assesses his influence and explores his various contributions to important debates on territory, the state, voting in a spatial context, locational conflict, globalization, scale, local economic development, and urban politics.

It not only provides a review of Cox's contributions, but also critically examines the ways in which his ideas have been deployed. Moreover, the book establishes and advances a research agenda for future work on urban politics, the state and territory, drawing insights from influential theorists working at the cutting edge of contemporary spatial research.

Introduction: Territory, the state and urban politics in critical perspective,

Policy transfer in space: entrepreneurial urbanism and the making up of ‘urban’ politics, Kevin Ward.

Territory and Difference: Structure, agency and South Africa – some influences of (and on) Kevin Cox, Jeff McCarthy;