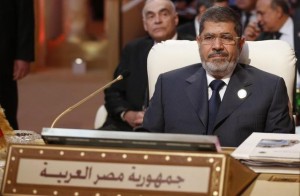 Egyptian President Mohamed Morsi has announced that parliamentary elections are expected to be held in October, six months later than originally planned.
Speaking to the Egyptian community in the Qatari capital of Doha, Morsi said that he "expected parliamentary elections would be held in October and that parliament would be in session before the year's end," the official MENA news agency reported on Wednesday.

This comes as the upper house of parliament approved on Tuesday a new electoral law, which will be reviewed by Egypt’s top court before ratification.
The elections were first scheduled for April, yet they were postponed by an administrative court, stating that Morsi has ratified a new electoral law without sending it to the Supreme Constitutional Court for approval.

Meanwhile, Morsi has been criticized that the timing of the election was wrong since the country is battling unrest and deep political division; however, the president has instead argued that the polls would lead to stability.

Clashes broke out on March 22 between Muslim Brotherhood movement and opposition protesters, in which nearly 200 people were injured, after anti-government demonstrators ransacked three Brotherhood offices in capital Cairo, in the second-largest city of Alexandria, and in the Nile Delta city of Mahalla.

The protest against Morsi has been called by over 50 political parties and figures, who have also demanded snap presidential polls and a new constitution.
The protesters accused Morsi of using his power to promote the interests of the Muslim Brotherhood.

This entry was posted in * English, * International Elections Survey. Bookmark the permalink.