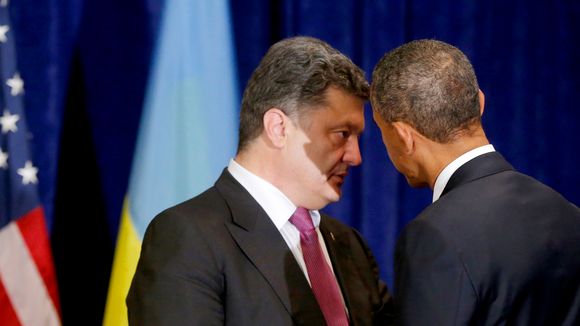 If Poroshenko wanted to save the country, he would have to offer to negotiate with Novorussia the establishment of bilingual neutral confederation Ukraine.

Poroshenko came to belligerent Sloviansk, announced ceasefire and peace plan for S.E. Ukraine, the same one that he promised immediately after his election victory: in 15 points it spells surrender of Novorussia. Poroshenko said couple days earlier that his plan would be effective after taking Ukraine-Russia border under control. Recent fierce fighting was to surround Donetsk and Lugansk republics, cutting them off from the border. The rebels continue to hold many border areas. Ukrainian troops officially confirmed that the border is not blocked.

Likely, Poroshenko knew the chances to regain border control are null, and just wanted to demonstrate junta’s resolve to fight for a united Ukraine. “Peaceful” Poroshenko may also be a reaction to Moscow’s criticisms of Kiev: Now, you see, we pressed on Poroshenko, he ceased fire. Now you push on the Novorussia, let begin negotiations – EU will say.

Fine, but exactly what does Kiev intend to negotiate with insurgent republics, and under what conditions? Poroshenko’s draft plan appeared a few hours before the official publication. Later, it turned out that he wanted to announce his plan in a show-off. He came to Sviatogorsk, a walking distance from insurgent-controlled Slaviansk, and declared a truce for a week. Concurrently, the peace plan was announced

9 of the plan’s 15 points deal with settlement of the violent conflict, and 6 with position of the region thereafter. Negotiations on the latter can’t begin before the former is completed, but according to deputy chief of Poroshenko administration, Chaliy, “all elements of the plan should be carried out simultaneously, rather than sequentially”. However, who is going to negotiate with Poroshenko who does not recognize the rebel republics’ leaders, and vice versa.

THE PLAN PROVIDES FOR A 7-DAY TRUCE, AND THE FOLLOWING:

“1. Guarantee security for all participants in the negotiations.”

Negotiations on the surrender of weapons, or on the future political structure of Donetsk and Lugansk regions? There is a fundamental difference: while the secessionist republics could discuss a comprehensive political settlement, they would not disarm before that. Clearly, at the beginning of talks, Kiev would insist that constituent parts of Ukraine shall recognize the new president and participate in parliamentarian elections, while Donetsk and Lugansk would want to discuss the terms of their “divorce” from Ukraine, recognition of their independence and withdrawal of Ukrainian army from their territory. But Kiev is not ready for that.

In points 9-15 Poroshenko offers: re-instatement of the local authorities, decentralization (as he understands it: through the election of local authorities and guaranntees to protect the Russian language, changes in Ukrainian constitution), and nomination of governors in both regions until elections. For Novorussia, this is not even barely sufficient basis for negotiations.

All these things should have been offered before much blood was spilled. Today, to save the country, Kiev must initiate to discuss the establishment of a bilingual, neutral confederation Ukraine. Many Novorussians would oppose, but at least the initiative would show Poroshenko was serious. Instead, he tells them to disarm, go home, let junta forces into your cities, and obey an elective government of unitary Ukraine. Who does not like it, move to Russia.

“2. Exempt from criminal liability those who laid down their arms and did not commit serious crimes.

7. In the structure of the Interior Ministry, provide for implementation of joint patrols.

Points 4 and 5 are, of course, the key: here is a corridor for you, go away. But the insurgents, both local and outside, are not going to go anywhere. Kiev cannot alone create any corridors nor 10-km buffers (and Poroshenko’s administration even toys with a 100-km zone). The insurgents thwart any such attempt immediately. Does Poroshenko really think that insurgents would withdraw from the border, let in the Ukrainian army, and then lay down their weapons and leave for Russia, abandoning their families to some “joint patrols”? Or, that they would watch from Russia the Donetsk region elect local government and Kiev parliament?

Hopefully, Moscow will persuade Novorussia accept a plan that even Kiev visionaries cannot. Not for nothing, reactions were so sharp by Russia’s foreign ministry to Ukrainian diplomat comments that Lavrov allegedly approved the plan. In fact, this “peace initiative” is just another element of the West – Russia game: you wanted a ceasefire and Kiev went for it, but your Novorussia has not accepted the truce terms, so now you’re the aggressor. Again, new threats, sanctions and all that we have seen over the past months, with one significant change: when hostilities resume (if at all they do stop for even a few days), they will gain intensity, forcing Russia to move to a new phase in the Ukrainian crisis, ever closer to “peace enforcement.”

Poroshenko’s truce offer would be the first real step towards peace only if his plan camouflaged Kiev’s realisation that Ukraine has already lost Donetsk and Lugansk regions. Then, despite talk breakdown, the truce would undergo extensions, while the president tried to strengthen his grip on the remaining territory of Ukraine. However, there are no hopes for such a scenario, hence more blood will flow before a true ceasefire.