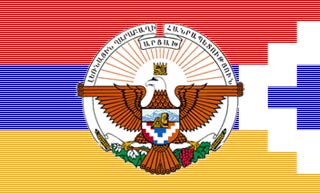 Karabakh MFA: “Crimean referendum ‘yet another manifestation’ of people’s right to self-determination” …

The Ministry of Foreign Affairs of the Nagorno-Karabakh Republic (the Artsakh Republic) considers the referendum held on March 16 in the Autonomous Republic of Crimea as “yet another manifestation of realization of the right of people to self-determination.”

In a statement released on Monday 17 march, the Ministry said that “the right of every people to choose its path of development and determine its destiny on its own through democratic expression of will, as it is enshrined in the UN Charter and a number of fundamental international documents, is a key principle of international law.”

“The experience of recent years, in particular the referendums envisaged in Catalonia and Scotland prove that the recognition and realization of the inalienable right of people to self-determination is the most optimal and democratic way for the peaceful settlement of this kind of issues,” it said.

“The Ministry of Foreign Affairs of the Nagorno-Karabakh Republic hopes that the situation following the referendum in the Autonomous Republic of Crimea will be addressed and resolved in the legal context exclusively by peaceful means.”

Nagorny-Karabakh (capital Stepanakert), which wants to be “the second Armenian State”, enclave with Armenian majority in Azerbaïdjan, made secession from Baku at the end of a war which made, between 1988 and 1994, thousands of deaths.

Upper-Karabakh had the benefit, within the Soviet Republic of Azerbaïdjan, of the statute of autonomous region. In 1988, with the favour of Gorbachev’s perestroïka, the local population required the reunification of the enclave to the Soviet Republic of Armenia. In spite of multiple attempts of Moscow to restore calm in the country, a true war burst between the area and Azerbaïdjan after the fall of the USSR in 1991. September 2, 1991, the separatist authorities proclaimed the independence of the Republic of Upper-Karabakh including the autonomous region of Upper-Karabakh and the district of Chaoumian.

A “Frozen conflict”:
A cease-fire intervened in 1994 but the situation remains tense, in spite of efforts of mediation of the SOEC group of Minsk. Since, negotiations are in progress at various levels between Baku and Erevan. A “frozen conflicts” last around these republic, that, with the support of NATO and of Washington, one tries to destroy by force. The situation remains tense in Upper-Karabakh, in spite of the cease-fire and the efforts of mediation of the SOEC.