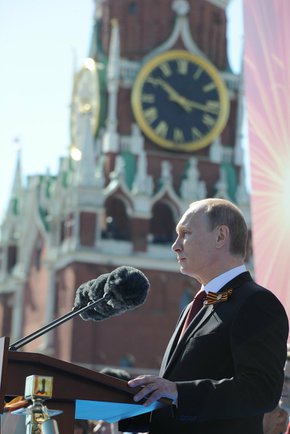 In keeping with tradition, drummers from the Moscow Military Music School opened the parade. They were followed by officers, sergeants and soldiers from various units marching in formation, including an honour guard from the three main branches of the armed forces, a ground forces regiment, an air force battalion, a naval battalion, battalions from the Strategic Nuclear Forces and Aerospace Defence Forces, and a paratroopers’ regiment. Other formations included students from the military academies and a cavalry honour escort from the Federal Guards Service’s Presidential Regiment. Around 11,000 service personnel took part in the parade.

The Moscow Garrison Military Orchestra provided the musical accompaniment for the parade.

Soldiers and sailors, sergeants and warrant officers, corporals and midshipmen, officers, generals and admirals, I congratulate you on Victory Day!

Sixty-nine years have gone by since the Great Patriotic War ended, but May 9 was and still is our biggest holiday. It is the day of our national triumph and our people’s pride, and also the day of sorrow and eternal memory.

On this day we see the overwhelming strength of patriotism and feel especially acutely what it means to be loyal to our homeland and how important it is to defend our country’s interests.

We must remain worthy of our forebears’ deeds. They fought to the death with the enemy, defending their native land, and they vanquished Nazism.

This victory was forged on the frontlines and on the home front, in partisan detachments and in the underground. The courage of blockaded Leningrad brought it closer, as did the bravery of Sevastopol’s defenders and the valour of thousands of soldiers who held their lines firm.

The fierce battles for Moscow and Stalingrad, Kursk and the Dnieper determined the outcome of the whole of World War II. The Soviet people’s iron will, fearlessness and steadfast courage saved Europe from enslavement.

It was our country that pursued the Nazis right back into their dens, dealt them the full and final blow, and achieved victory at a cost of millions of lives lost and terrible trials endured.

We must always preserve this sacred and unfading truth and not allow others to betray or forget these heroes who sacrificed everything for the sake of preserving peace in our world.

Friends, today we bow our heads in memory of those who are not with us any longer. Every family honours their devotion to their Fatherland.

The unbroken link between generations is our immense national treasure and it is here that Russia’s strength and dignity lies. We thank our veterans. We are proud of you.

There is no one dearer and closer to us than you on this day. On this day we honour you with flowers, fireworks and military parades, but most important of all, we give you the warmth of our hearts.

You not only traversed the tumultuous war years with honour, but also rebuilt the country and worked for the common good, knew the meaning of friendship, knew how to find joy in life, and this is the lofty legacy you handed on to us – this summit of creation, unity, and love for our Motherland.

We will never let you down. We will look after Russia and its glorious history and will make service to our country the highest value, as it always was throughout our history. I am sure it will always be so in the future too.

Glory to the victorious people!

Happy holiday to everyone!