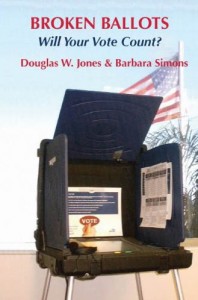 At each election in Eastern Europe, Africa or Middle-East, US or Western observers, such as those from the Organization for Security and Cooperation in Europe (OSCE), unsurprisingly, strongly criticized the elections …

But the Western countries, and the center of the Western world, the USA, its hegemon, are well placed for determining criteria for the validation of elections ? That is the real question.

A new book, BROKEN BALLOTS. WILL YOUR VOTE COUNT?, issued in the USA, and focused on the new voting systems (machines or computers for voting), upraises – again – serious questions about the electoral fraud in USA.

I : THE CONTEXT: ELECTORAL FRAUD IN THE USA

The pretentiousness of  US or Western observers and organizations from which they come to claim determine democracy criteria of an election is fun. When the Atlanticist flagship democracy, that of the U.S. hegemon, is about to fraudulently elect – thanks to a well-functioning system in 2000 and 2004 by G. W. Bush and his spin-doctors, including the infamous Karl Rove, further serving Romney in 2012.

"Should we fear cheating during the U.S. election? "headlined precisely the daily LA LIBRE BELGIQUE (Brussels) on 30 October 2012, about the US presidential election of 2012, stating that" The shadow of 2000 hangs over 2012: should we fear cheating during the U.S. election? These concerns are not new and the Anglo-Saxon term SNAFU is back in fashion: "Situation Normal: All Fucked Up". In an election that all polls ahead shoulder to shoulder, every vote counts. The slightest manipulation can change everything. "" Cheating in Ohio is possible, "explains Pierre Guerlain, a professor of American Civilization at the University of Paris 10 Nanterre-La Défense. "And his “possible" means rather a" probable ". "(1)

And Pierre Guerlain is not the only one to evoke a fraudulent scheme. Here Nicholas Dungan, a researcher at the Atlantic Council and advisor to the IRIS: "When everything is local, it is very difficult to control. '

For Wladimir Churov, Chairman of the Central Election Commision of the Russian Federation, "the dark side of the American elections is that OSCE observers were banned from entering polling stations, even in states that are under U.S. federal law (…) Unfortunately for the American voters, the international monitoring of the U.S. electoral process, which seems seriously vulnerable to manipulation, is not sufficient to guarantee democratic standards "(2).

Churov alludes to an incredible fact. The prohibition of entry of OSCE observers – OSCE which includes the USA – in the polls for the presidential election in 2012, in many U.S. states, in particular Texas (3). So the OSCE, which intends to give lessons in democracy to many states – not those of NATO – and which "regularly sends its observers to monitor the elections in the world," is unable to control the electoral process in the USA, yet highly contested.

“BROKEN BALLOTS. WILL YOUR VOTE COUNT?”.

“ For many of US citizens, the presidential election of 2000 was a wake-up call. The controversy following the vote count led to demands for election reform. But the new voting systems that were subsequently introduced to the market have serious security flaws, and many are confusing and difficult to use. Moreover, legislation has not kept up with the constantly evolving voting technology, leaving little to no legal recourse when votes are improperly counted”, writtes the publishers. Then putting the central question: “How did we come to acquire the complex technology we now depend on to count votes?”

Douglas Jones and Barbara Simons probe this question, along with public policy and regulatory issues raised by our voting technologies.  Broken Ballots is “a thorough and incisive analysis of the current voting climate that approaches American elections from technological, legal, and historical perspectives”.  The authors examine “the ways in which Americans vote today, gauging how inaccurate, unreliable, and insecure our voting systems are (…) An important book for election administrators, political scientists, and students of government and technology policy, Broken Ballots is also a vital tool for any voting American.”

Moreover, this book must be read too in Europe. Where the same problematic is on debate. Particularly in France and Belgium where the question of the electronic vote by computer is open for years …

Listen to Pierre Guerlain: "The voting machines are managed by the Bush clan for years and acquaintances also appear between these companies and Romney. Already in 2004, Diebold, a leading provider of voting machines in the country, was led by Walden O'Dell. But the man has a dual role: he is very active at the time in Bush's reelection committee. This is a Republican pure sugar. In 2004, he most certainly cheated in favor of his candidate. This year, in a number of states, in particular Ohio, swing state that could swing the election, voting machines will be provided by the company Hart InterCivic, partly owned by the investment fund HIG Capital. The discomfort occurs when the FORBES magazine, through its columnist Rick Ungar, announced that four bosses of the company, including founder Tony Tamer, played the role of "fundraiser" on behalf of Mitt Romney during the presidential campaign, while two members of the board would be personal contributors of the campaign of the Republican. The unease settles when one learns that the company is the 11th largest contributor to the campaign. Unease drags on when we know that Romney's son, Tagg, owner of the investment company Solamere Capital, shares business interests with HIG Capital. '

"It must be said that these machines are easy to tamper: each county organizes the vote as it wishes, so there are 50,000 different ways to vote, and it is very difficult to control," explains Pierre Guerlain. "And this is not new (…) In 2000, the election between Al Gore and George W. Bush is still tainted with a lot of doubts about the fairness of the process "," reference to recount in Florida. It took one month to the Supreme Court to ultimately determine with 537 votes ahead of his opponent, Bush's victory, "said La Libre. What about 2012? "The teams of lawyers are ready on both sides to intervene. It is possible that there are big debates in the aftermath of the election and we will not be able to announce the winner in the first hour, "concludes Pierre Guerlain. "If there is cheating, it will be in favor of Mitt Romney. We talked about falsification of the election of Kennedy in 1960 but since then, the Democrats have not been suspected though in 2008 there is some doubt. In swing states, in articular Ohio and Florida, it is possible that some figures were manipulated but not to the point of reversing the election. '

(2) Vladimir Churov, Chairman of the Central Election Commision of the Russian Federation,

(3) The State of Texas, in the southern United States, threatens to sue the observers from the Organization for Security and Cooperation in Europe (OSCE) if they go to the polls during the presidential election on November 6. The Minister of Justice of the State, mostly conservative, Greg Abbott, warned this week the OSCE that its observers will not be allowed within 30 meters of a polling station, with the risk of committing "a criminal offense" . "Failure to do so could lead to prosecution of the representatives of the OSCE," writes Mr. Abbott in a letter to the Head of Unit for Democratic Institutions and Human Rights of the OSCE, Daan Everts. "Any group or individual from outside the United States is not allowed to influence or interfere in the electoral process in Texas," he says.

He specifically criticized Daan Everts to have met with organizations like Project Vote, fighting against a new electoral law in Texas considered discriminatory for disadvantaged minorities. The law of 2011, which was rejected by an appeal court in Washington in August, requires in order to vote, to present a driver's license, a passport or a permit to carry weapons, but refuses student card or proof of residence, hitherto allowed. Texas has appealed this decision to the U.S. Supreme Court. Many voices believe that the law disqualifies minority voters, mostly favorable to Democrats, because they often do not have birth certificates or because the establishment of their identity is costly and complicated. Greg Abbott cites an opinion of the OSCE that this would be "an obstacle to the right to vote." "Your opinion is not legally valid in the United States, where the Supreme Court has already held these laws constitutional " (in Georgia and Indiana, note), says Abbott.

BROKEN BALLOTS. WILL YOUR VOTE COUNT?

Center for the Study of Language and Information

Publisher: Center for the Study of Language and Inf

Series: Center for the Study of Language and Information – Lecture Notes Series

What other experts are saying about the book:

as it was intended. Broken Ballots first demonstrates clearly and compellingly the extent to

which that right is in jeopardy. Then it lays out a plan to preserve and protect that right. Kudos

to the authors and to all those fighting to safeguard our democracy.”

* “This book is a must read, not only for election officials and other policy makers, but also for

public interest groups who seek to protect the vote and, indeed, for every citizen who wants his

or her vote to be counted.”

– Fritz Schwarz, Chief Counsel, Brennan Center for Justice at the

* “Broken Ballots is the definitive source of information about voting technology, past and present. But it is not purely focused on technology issues; it also thoroughly examines the policy issues surrounding the use of various voting technology. Most importantly, it documents the history of how these issues have been dealt over the centuries.The authors were directly involved in making some of that history in the last decade. This recent history is a particularly fascinating case study of many aspects of the making of policy about the use of technology, including the roles of business, election officials, politicians, activist, and technologists. It is not possible to understand elections without understanding the technology that makes them function (or malfunction). This book is essential reading for anyone who cares about elections.”

* “Americans want to believe their votes are counted reliably, fairly, and fully, yet they have a nagging suspicion that all is not well in our country's voting systems. Broken Ballots chronicles in the greatest detail how these suspicions have been examined and how improvements have been pursued, rejected, implemented, or defeated. Jones and Simons detail the intricacies involved in maintaining the integrity of voting procedures and technologies and in protecting the outcome of elections from error or manipulation. Presenting evidence that ballot box access and security are under serious threat by the push for unauditable voting machines and untested and unsecured internet-based voting, Broken Ballots forces us to examine closely our electoral process. As a nation, we must take a serious look at the suggestions provided by Jones and Simons and enact the legislation needed to make strides toward secure, accessible, and verifiable elections. What can be more important?”

* “In my opinion, it is the most thorough, well researched, and definitive publication on this subject that has ever been written — despite the reality that it was under perpetual gestation for many years, because the ground under our elections has continually shifted, although often not for the better. The commercial vendors undoubtedly will hate it, because it truly documents a reality in which the seams are unseemly, and the lack of accountability is almost unbelievable. But it is one of the most important books around for those who believe in democracy.”

2. Déjà Vu All Over Again

3.2 Fraud and Reform in the Interwar Era

3.4 The Rise of the Punched Card

3.5 The Trouble With Chad

3.6 The Success of the Votomatic

3.7 What's Wrong with the Votomatic

5.2 The First Generation at the Polls

5.7 What Happened in Sarasota?

6.1 The Press for Standards

7. The Problems with Diebold

7.7 What Can We Learn from Diebold?

8.5 The Top to Bottom Review

9.4 Some Early Legislation and Litigation

9.8 How Accessible are DREs?

11.8 The Future of Internet Voting

12.1 The Role of Public Interest Groups

13.3 Examining Other Aspects of Elections

A.1 Lawsuits involving Jim Dickson or the AAPD

A.2 Lawsuits involving the NFB