# EODE THINK TANK / LIKE IN KIEV, A COLOUR REVOLUTION IN HUNGARY!

On NYT, a pic of Protesters opposed to a planned Internet tax waved flags with the likenesses of Prime Minister Viktor Orban of Hungary and President Vladimir V. Putin of Russia during a rally in Budapest ….

There is in geopolitics as in politics "decisive years" (in the words of Spengler). We have entered a decisive decade. It is Washington's willingness to engage in a historical cycle that aims to make "the 21st century a new American century". According to the very terms, and identical, of all US geopolitical experts and ideologues, whether George Friedman of STRATFOR (in his book "The Next 100 Years”) or the Neocons (in line with the manifesto of PNAC) back on the front of the scene.

The American machine has therefore launched a logic of confrontation with its two major designated enemies: Russia and China. And in the same motion, a wave of regime changes was planned, using the well-regulated machinery of "colour revolutions": Ukraine is the first success but are also aimed Venezuela of Maduro (two attempts already), China with "Occupy Hong Kong" (1), and especially all Africa (2), where Washington intends to block China's economic progress and the geopolitical return of Russia (enemy No. 1), and where a first "colour revolution" is underway in Gabon (3) …

Hungary of Viktor Urban is a new colour revolution in Europe, after Ukraine, but within the European Union this time! With the enthousiastic support of THE NEW YORK TIMES and its cover of anti Orban rallies with Soviet era style flags of Orban and Putin. The target there is clearly identified …

It ran with the title "Kiev Scenario with Western Sponsor?"  :
Magyar Nemzet : “Although in Budapest Molotov cocktails are not flying and blood does not flow in the streets, as it did this time last year in Kiev, but to explore parallels and the logic of events at Kossuth Square.
This scenario was the first point where students and NGOs began protests in Kiev's main square with America's strong support.
Masses appear vital to the future of the European Union, demanding a change of government, as well as anti-corruption slogans took over the streets.
It is known in the Hungarian capital that ever since the participants in the demonstrations virtually marched under banners such as Hungarian domestic counterparts – sometimes accompanied by Andre Goodfriend, US attorney.
This was followed by the second item on the streets of Kiev scenario with the far right Right Sector appearance, and behind them the peaceful demonstrations, before the first shots, flew the first Molotov cocktails.
Today in Budapest, Kossuth Square "Nowhere to recede", between the demonstration of beer bottle-throwing participants appeared Budaházy George, who previously was also accused of a terrorist organization as a manager of Molotov cocktail and armed attacks carried out by politicians to intimidate.
We all remember what it was over Kiev version of the story: the bloody street clashes, and there was even bloodier civil war; in the last year, it demanded a high power to play in the lives of thousands of Ukrainians in Ukraine.
It is not yet known what will be the end of the Hungarian scenario; it says a lot, about the same time that you complained Viktor Orban, about Hungary declared operational area to America.
In this context, intelligence expert Laszlo Földi between the year pointed out that if a country "action area" is declared, it means that there virtually all devices are allowed; Allied countries do not take such a step against one another – he emphasized.”

WHY THIS COLOUR REVOLUTION IN HUNGARY?

Because Victor Orban has committed the great sacrilege against both the ideology of the EU and against NATO designs in the East! Orban has indeed taken a stand for the EURASIAN IDEOLOGY, which is at the heart of the geopolitical project of Putin's Russia. That is to say, an EU member country – the small rump Europe of Brussels – supports the ideology and the Russian geopolitical project, competitor of the SECOND Europe (4). And he is not the only one in Hungary, as the powerful right-wing populist party Jobik also supports Eurasianism.
Orban in his momentum criticized the EU sanctions against Russia, refused to apply them, and oriented the Hungarian economy toward Moscow and the Eurasian Economic Union, which takes off in 2015 …

Considered by Washington and the Americanophile and Americanized politicians in Brussels as a "Russian Trojan horse", Orban has become a target. That of a regime change in the EU organized by the US networks specialized in the "colour revolutions". A Hungarian "maidan" on the Danube!

(4) On the geopolitical concept of "Second Europe", cfr. (only in French) EODE THINK TANK / GEOPOLITICS / THESES ON THE "SECOND EUROPE" UNIFIED BY MOSCOW 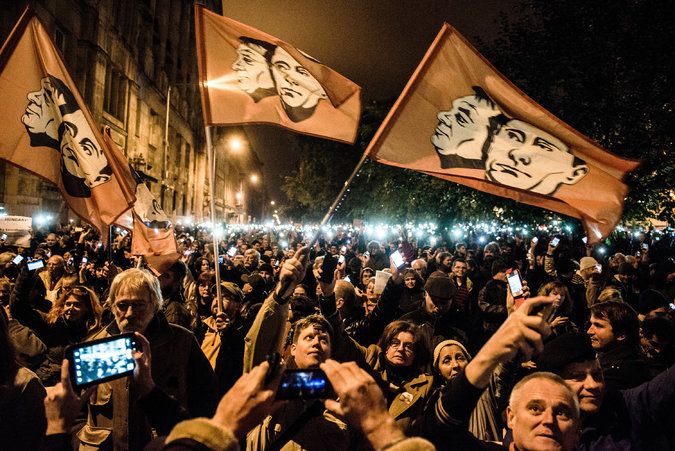