For nearly a year, the Ukrainian crisis has been the top story in the media. A diplomatic crisis between the duo Washington-Brussels against Moscow. Where the politicians of Kiev are only pawns. A crisis turned into a dirty war in the east by the pro-Western Kiev junta, which came to power by the coup of 21 February 2014. On the orders of their masters, the US and the IMF. Despite a shaky truce, the people of Donbass continue to die under the bombs and gunfire forces of Kiev. This for over 6 months now.

A complex issue, full of hidden backgrounds where geopolitics, ideology, History, economic appetites, and expansion of NATO to the East mingle and overlap.

In a first program, we explained how it all began, in Kiev and Sevastopol. And how the Crimea has become Russian.

We open for you the second part of this issue UKRAINE VERSUS NOVOROSSIYA with Luc MICHEL, international correspondent of AFRICA MEDIA and the EODE-TV boss.

It is dedicated to these self-proclaimed republics of Donetsk, the DNR, and LNR, which seceded from Kiev and intend to revive Novorossiya, the Russian provinces built by Catherine the Great in the late 18th century and linked to Ukraine after 1918.

With Luc MICHEL, geopolitical expert and expert on Russian and Ukrainian worlds, we will find the inside information. Observer sometimes, actor often, Luc MICHEL participated, with a EODE-TV team in an international conference in Yalta in Russian Crimea, on 29, 30 and 31 August, entitled RUSSIA – NOVOROSSIYA – UKRAINE. The opportunity to see the fight, theses and men who defy the New World Order and want to build a new state on the shores of the Black Sea.

He shows us unpublished analyzes given in the heart of this Conference of August 29 to 30, 2014. And also shares exclusive footage filmed by the EODE-TV team, which followed him there.

PART I / FEATURES AND LIGHTING:

* Before turning to our analysis, a summary of the opening of the Conference, on August 29, 2014, from the press service of the NGO Coordination Centre Novy Rus which organized the conference. Starring that first day Sergey GLAZYEV (beige jacket), an influential Russian politician, nationalist, founder of the Rodina Party (The Motherland), a former minister and parliamentarian, now a member of the Russian Academy of Sciences and Alexei MOZGOROY (in uniform), one of the great military leaders of the Army of Donbass. …

* Then we find Luc MICHEL inYalta for a first analysis, where he answers the following questions:

Begin by explaining to us what this conference is, which will serve as a prism to examine and understand the issue of Novorossiya.

Is the background of the situation a dialogue of diplomatic deafs, including the famous Minsk Conference?

Practically, what is the Novorossiya geographically and historically?

Behind a conflict that might be called regional, are there much larger geopolitical implications?

Are there consequences within the EU with the emergence of the Referendum as challenge to the established order?

* After images of the second day of the conference – starring Denis Pushilin – we find Luc MICHEL in a second analysis:

What meaning has taken this conference for the future of the Novorossiya? What ideas are being debated?

* One of those present at the Yalta Conference is Denis PUSHILIN, the president founder of the Republic of Donetsk.

Listen to his interview with Luc MICHEL …

* Our analyst Luc MICHEL is also the leader of what the Belgian press calls "a Russian international lobby." He was not a witness of the Yalta Conference but one of its speakers. We invite you to listen to his speech at the final session…

We find Luc MICHEL for the second part of this program, filmed before the Summer Palace of Tsar Nicolas II in Yalta, where the conference took place in 1945 between Stalin, Roosevelt and Churchill.

After the reports and interviews, here is a geopolitical analysis on global issues of what is happening in Ukraine, Donbass, Crimea and Black Sea.

In what Crimea plays such an important role at the international level?

The current unstable world then emerges in March 2014, in Crimea and Ukraine, with Eurasia as the epicenter of a new US-Russian conflict?

This is according to you the scheduled end of the New World Order?

Events in Crimea and Donbas therefore have, according to you, an exemplary value that one can not ignore, especially within the European Union?

Yet the Crimean referendum immediately disappeared from Western media once the case folded?

The Novorossiya will then live?

Stay tuned for our third program devoted to following the insurrection of Southeast Ukraine, the "Novorossiya" and the dirty war that Kiev leads there …

# AFRICA MEDIA co-produced a series of specials with geopolitical expert Luc MICHEL and EODE-TV on the theme: UKRAINE VERSUS NOVOROSSIYA, the Ukrainian crisis. The most comprehensive information on the crisis in Ukraine and the Black Sea.

All themes analyzed. This program is the second in the series.

With Luc MICHEL, geopolitical expert and expert on Russian and Ukrainian worlds, we'll find out inside information. Our expert knows intimately indeed the region. Since the 80s, Luc MICHEL has traveled throughout Eastern Europe: Baltics, Central Europe, Russia, Siberia, Ukraine, Belarus, Yugoslavia, Caucasus, Balkans … Sometimes observer, often actor of events. Many missions for his NGO EODE that organizes electoral monitoring and makes "parallel diplomacy" according to the Belgian press. Many political actions and conferences for his transnational political organization in Eurasia, the PCN-NCP. He especially knows Ukraine, Moldova and Transdniestria (PMR), and other countries of the Black Sea and the Balkans. Finally he also directed his private life to the east, Ukrainian girlfriend, then married to a Russian from Riga. His current wife is a native of Transylvania. 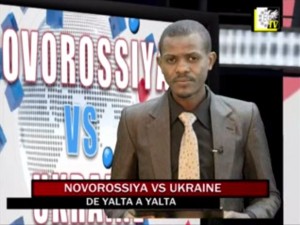 This entry was posted in * English, * EODE-TV. Bookmark the permalink.