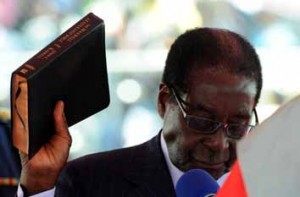 Harare, 22 August 2013 / Veteran leader Robert Mugabe was sworn in as Zimbabwe's president for another five-year term today before a stadium packed with thousands of jubilant supporters. Mr Mugabe pledged “to observe, uphold and defend the constitution of Zimbabwe” in an oath administered by Chief Justice Godfrey Chidyausiku, extending his 33-year rule.

Supporters clad in clothes emblazoned with the image of the man who has lead their nation since independence in 1980 filled the 60,000-seater venue, a show of force after elections opposition and Former colonial power Britain – but not African observers from AU and SADC – say were “rigged”.

Unlike previous low-key investitures, today's event ~ replete with banners, flags and chants ~ carried strong echoes of Mugabe's inauguration as prime minister of a newly independent Zimbabwe in 1980. Tanzania's Jakaya Kikwete, Namibia's Hifikepunye Pohamba and the Democratic Republic of Congo's Joseph Kabila were among those leaders who did attend.

Mr Mugabe was greeted in the stadium by thunderous cheers and whistling when he arrived with his wife on board a military truck. Gates to the Chinese-built stadium, the venue of Mugabe's inauguration as president in 1987, opened shortly after dawn. The day was declared a public holiday, helping boost attendance. “Mr Mugabe, you are one of a kind,” sang a group of supporters slamming the sides of the minibus taking them to the stadium. “It is a great day for Zimbabwe and the world will come to a standstill today,” said Alfred Tome, the Harare provincial administrator and spokesman for the organisers. A concert will include artists from South Africa, Zambia and Jamaica.

This entry was posted in * English, * EODE-TV, * International Elections Survey. Bookmark the permalink.