“The False Flag” is a video report from Chineese Television, on color revolutions in Eastern Europe, the so-called “Arab Spring” and the “Umbrella Revolution” with “Occupy Central” in Hong-Kong” since september 2014.

Protests in Hong Kong began in September 2014, after the Standing Committee of the National People's Congress (NPCSC) of the People's Republic of China announced its decision on proposed reforms to the Hong Kong electoral system. In its decision, the NPCSC said that civil nominations, whereby a candidate could run for election to the Hong Kong Legislative Council if he or she received signed endorsement of 1% of the registered voters, would be disallowed. The decision stated that a 1200-member nominating committee, the composition of which remains subject to a second round of consultation, would elect two to three electoral candidates with more than half of the votes before the general public could vote on them. This was the pretext for a trial of “color revolution” in Hong-Kong.

Demonstrations began outside the Hong Kong Government headquarters, and members of the what became called the “Umbrella Movement” occupied several major city intersections. The Hong Kong Federation of Students and Scholarism began protesting outside the government headquarters on 22 September 2014 against the NPCSC's decision. On the evening of 26 September, several hundred demonstrators led by Joshua Wong, a pro-american activist, breached a security barrier and entered the forecourt of the Central Government Complex (nicknamed "Civic Square"), which was once a public space that has been barred from public entry since July 2014. Officers cordoned off protesters within the courtyard and restricted their movement overnight, eventually removing them by force the next day.

On 28 September, the “Occupy Central” with “Love and Peace movement” (sic) announced that they would begin their civil disobedience campaign immediately. Protesters blocked both east–west arterial routes in northern Hong Kong Island near Admiralty. Police tactics (including the use of tear gas) and attacks on protesters by opponents that included triad members, triggered more citizens to join the protests, occupying Causeway Bay and Mong Kok. The number of protesters peaked at more than 100,000. The government called for an end to the protests by setting a 'deadline' of 6 October, but this was ignored by protesters, although they allowed government workers to enter offices that had previously been blocked.

The state-run Chinese media claimed repeatedly that the West had played an "instigating" role in the protests, and that "more people in Hong Kong are supporting the anti-Occupy Central movement," and warned of "deaths and injuries and other grave consequences." 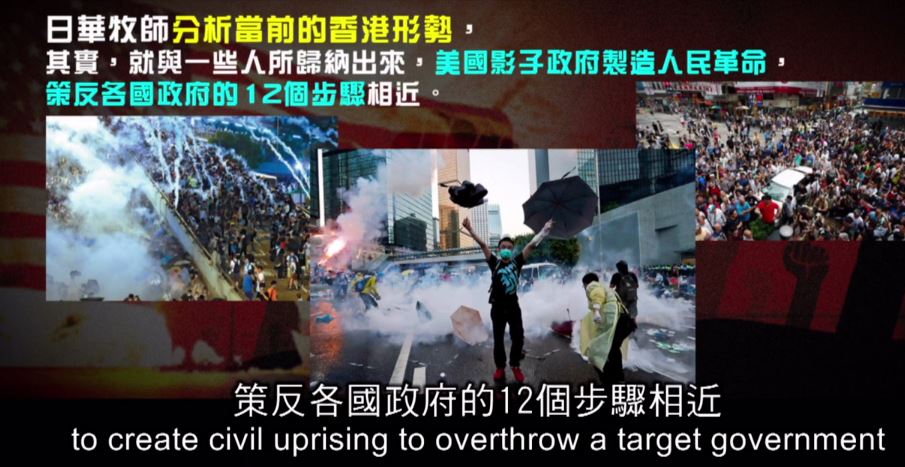