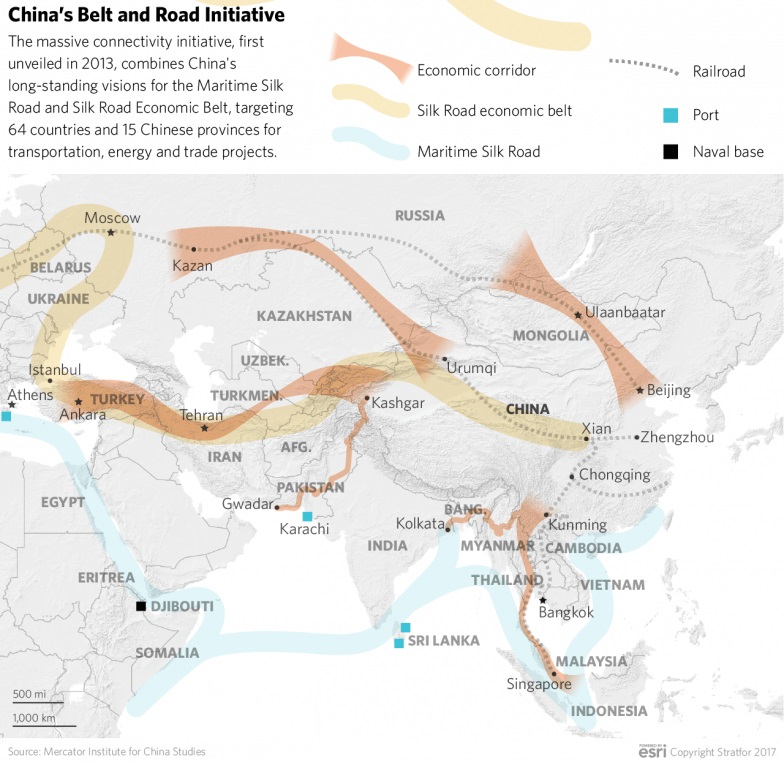 STRATFOR is exploring the underlying motivations behind China's ambitious “Belt and Road Initiative” and the challenges that it will face (the “new Silk road” project seen from the USA):

“The Silk Road has become the stuff of legend. For centuries, the web of trade routes, which expanded to traverse Central Asia and the Mediterranean Sea, connected China to the European Continent, facilitating commerce and cultural exchange. But beyond the economic opportunity that the Silk Road afforded China, it also served a strategic purpose. The Han Dynasty first pursued the routes to defend its heartland from overland invasion and to extend its influence westward. Subsequent rulers in the country continued this mission in one form or another over millennia and through different forms of governance. Mao Zedong, for instance, started the Third Front Movement in the mid-1960s to fortify China's interior. And today, as the country's political and economic priorities evolve, its quest to develop its more remote reaches and diversified trade routes while enhancing its access to foreign markets in the region is no less important. With these goals in mind, Chinese President Xi Jinping launched his signature Belt and Road Initiative in 2013 (…)

As Beijing's influence in the target countries grew, however, they became wary of the Belt and Road Initiative. Members of the Association of Southeast Asian Nations (ASEAN), for instance, have found it increasingly difficult to maintain a unified front against China — especially on issues such as maritime disputes — because of varying levels of investment pouring in from Beijing. The predicament may dampen enthusiasm for the Belt and Road Initiative among Southeast Asian countries that want to limit their dependence on China. Similarly, the European Union's core members have found Beijing's interest in Eastern Europe to be more competitive than cooperative, something that could influence their policies toward Beijing in the future (…)

As China's strategic interests move farther beyond its borders, they will inevitably evolve in keeping with domestic, regional and international developments. The Belt and Road Initiative is just one area in which Beijing may have to adapt its policies and rethink its role on the international stage to accommodate a changing global order. In fact, signs suggest that the shift is already underway: China, which has long adhered to a doctrine of noninterference, is deepening its security ties with Central and South Asian states to combat the threat of Uighur militancy. At the same time, it has begun taking a more proactive approach to conflicts in Myanmar and to territorial disputes in areas such as Kashmir — both areas targeted for Chinese infrastructure. The Belt and Road Initiative, however gradual its progress may be, will test China's mettle as a rising global power.”

* See my analysis (in French) on PCN-TV/