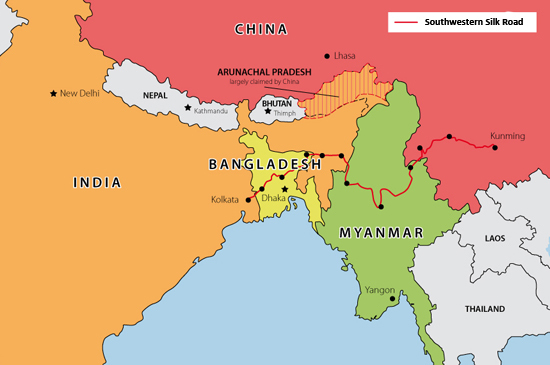 STRATFOR is exploring the underlying motivations behind China's ambitious “Belt and Road Initiative” and the challenges that it will face (the “new Silk road” project seen from the USA) / PART II:

The Bangladesh-China-India-Myanmar corridor “weak link” of the  “Belt and Road Initiative”:

“Russia and India, meanwhile, are keeping a close eye on China's activities in their traditional spheres of influence. Moscow sees Beijing's investment in Central Asia as a boon for the perennially unstable region, though its growing security presence in the former Soviet territory may inevitably interfere with Russia's imperatives there. Changes in Russia's policies, or in its relations with the Central Asian countries, could jeopardize China's rail and energy projects in the region. Similarly, China could run into complications in its pursuits in South Asia. India vehemently opposed the China-Pakistan Economic Corridor (CPEC) — which it views as part of Beijing's strategy to encroach on the subcontinent — arguing that it would undermine its claims to the contested Kashmir region. In addition, the region's geographic, political and security challenges will likely impede progress on the CPEC as well as the long-stalled BANGLADESH-CHINA-INDIA-MYANMAR CORRIDOR. The projects make easy targets for local separatist or jihadist groups and fodder for political factions leery of China's increasing sway.”

China-Pakistan Economic Corridor and the tension on the Chineese-Indian border :

“Beyond that border, old rivalries are resurfacing. China continues pushing forward on a number of actions, including its Belt and Road Initiative, its work with Pakistan on the CHINA-PAKISTAN ECONOMIC CORRIDOR, its port project with Sri Lanka and its various infrastructure projects with Nepal. New Delhi is worried that Beijing has begun encroaching on India's traditional sphere of influence. So India has attempted to counterbalance China's efforts by enacting its own infrastructure projects in Africa and accelerating its Act East push, which includes partnerships with Japan and Vietnam. The latest road construction controversy near Pangong Lake highlights just one among many sources of disagreement between India and China.

* See my analysis (in French) on PCN-TV/

This entry was posted in * English. Bookmark the permalink.