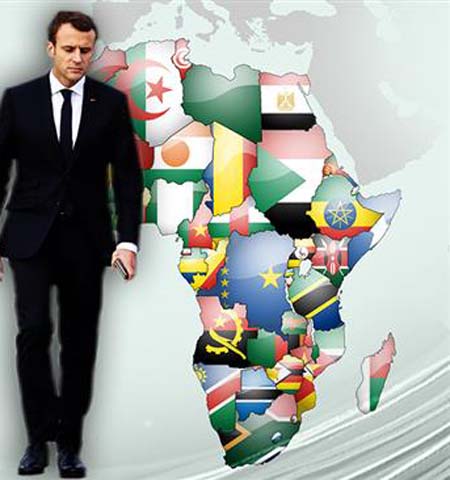 seen from the USA (‘Quartz Africa’)

“France has had a long centuries-long relationship with Africa and in particular with the countries that it colonized until the early 1960s. Those countries, mainly in West and Central Africa, but also in North Africa as well, are home to over 120 million people.

Unlike Britain, the other major colonizer of Africa, France’s post-colonial ties have remained firm, through major upheaval and economic change. But in recent years those ties had started to fray around the edges, with the increasingly tense debate around the CFA, the two common currencies of West and Central Africa, which are still guaranteed by the French treasury.

Enter president Emmanuel Macron. At 39, he became the youngest-ever president of the French republic, he’s widely credited with revitalizing France and elements of French self-belief. As the first president born after the majority of Francophone Africa gained independence, he’s made clear time and again he believes African countries can find their own way without paternalistic European leadership, though he’s also had missteps in getting that point across.”

“The French president also leans into a “make France great again” philosophy. He’s determined for France to be seen as a modern country, leading on the 21st century global stage, particularly when it comes to business and trade.

Macron has visited Africa seven times, touching down in nine countries since becoming president last May. He sees Africa playing an important role in bolstering France, its business and a Francophone-first philosophy. Not all African Francophone thinkers agree with that philosophy.

His stated interested in Africa was clear to see at the, Vivatech technology show this year, where he toured the packed exhibition hall in Paris and made a point of visiting the Africa stands with Rwandan president Paul Kagame, taking selfies with African entrepreneurs.

On the main stage Macron said the French development agency (AFD) will be backing a new digital $76 million (€65 million) digital project which will offer funding for African startups. “African startups have energy but the big providers of development aid and financiers have not adapted to that. We ourselves are too slow, too hesitant,” said Macron speaking on stage switching between French and English, the language of Silicon Valley. He said the fund would work “to fill the gaps in the support with small sums ranging from €30,000 to €50,000, which is what startups need.”